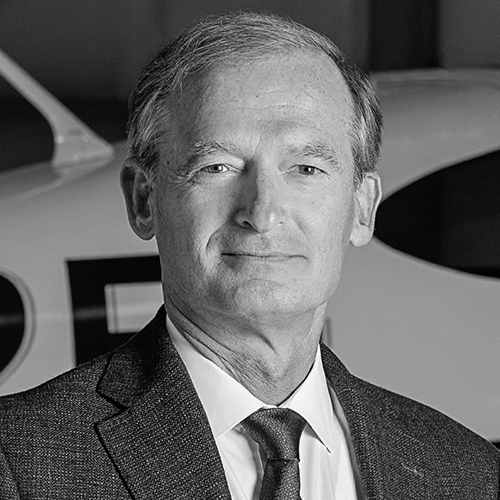 Mr. Bye is the Founder, CEO and Chairman of Bye Aerospace.  He is the innovator behind Bye Aerospace, which was founded in 2007, with two decades of experience as an aerospace entrepreneur, engineer and executive, balancing internal development with research of advanced concepts.

Bye has developed several aircraft designs. He is the driving force behind the concept and development of a new all-electric eFlyer 2, eFlyer 4 and eFlyer 800 which Bye Aerospace launched in 2013. The eFlyer 2 is now in the FAA certification process.  Previously he designed the 14-foot wing-span solar-electric hybrid UAV, “Silent Falcon,” now in production in a former Bye Aerospace subsidiary.  He also conceived the new, piloted solar-electric SOLESA design which has recently begun flight test.

Previously Bye led the company that launched and developed the Javelin, a transonic two-seat jet for military and civil utility and holds the design patent for the Javelin which first flew in September 2005.

Bye is a well-known pioneer and conceptual design engineer and has been asked to consult with major OEMs on their advanced development programs.  He has authored articles for industry journals, textbooks and publications, holds a B.S. in Engineering from the University of Washington and is an ATP rated pilot with over 4,000 flying hours. He was a USAF instructor pilot in the supersonic T-38 for Euro-NATO Joint Jet Pilot Training, C-141B Aircraft Commander and is a Desert Storm veteran.