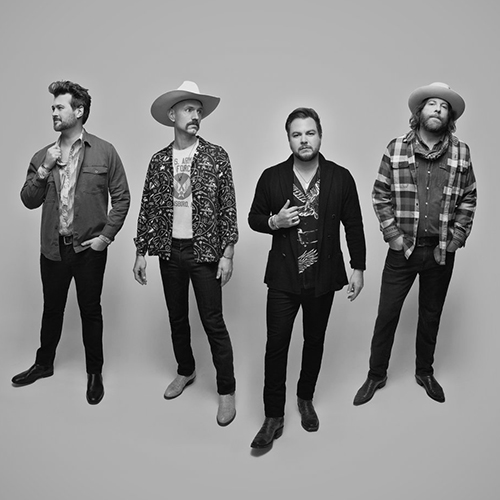 ELI YOUNG BAND has always been unique in modern Country music – a true band of brothers who play their own instruments, write their own songs and cling fast to their Texas roots. With LOVE TALKING out now via The Valory Music Co., they embrace what makes them different once and for all.

Overall, lead singer Mike Eli found himself writing more than 150 songs in the time since the GRAMMY-nominated band released THIS IS ELI YOUNG BAND: GREATEST HITS in 2019. On LOVE TALKING, he joins forces with Nashville stalwarts Jimmy Robbins, Laura Veltz, Josh Osborne, Jon Nite and more. Also finding a home on the album is the sentimental “Lucky For Me” and tongue-in-cheek “Break Up In A Bar.”

“We really wanted to find the positivity in what we got out of the last two years, so that was one of the main goals for this album,” notes Eli. “There was a lot of unknown that was written into some of the music we created during that time, but we all lived it so deeply; we wanted to offer something uplifting with our music.”

Eli founded the band with guitarist James Young, bassist Jon Jones and drummer Chris Thompson at the University of North Texas in 2000, steadily building a grassroots fanbase that propelled four No. 1 singles and gave the band an edgy, romantically-charged identity (4X PLATINUM “Crazy Girl,” 2X PLATINUM “Even If It Breaks Your Heart” and PLATINUM “Love Ain’t” and “Drunk Last Night “).

The trailblazing group has come a long way since with a dynamic career thus far producing Billboard's No. 1 Country Song of the Year and ACM Award for Song of the Year with “Crazy Girl,” plus racking up over 2 billion streams to earn Pandora Billionaire status. Multiple CMA, CMT, ACA and Teen Choice Award nominations along with over 3 billion streams of their career catalogue offer an undeniable of EYB’s unique connection with fans. Even through sonic evolutions and changes to the Country industry, their obsessive following has continued to grow.

What they’re good at has always been the same – organic, live-show focused Country dripping with authenticity and perfected in sold-out clubs, amphitheaters and stadiums coast-to-coast. Confident in their soulful, hearts-on-fire brand of Country, the title track of their forthcoming album is impacting Country radio and playlists now as they head out on a 51-city tour of the same name. EYB has also shared the stage with Kenny Chesney, Rascal Flatts, Tim McGraw, Jason Aldean, Toby Keith, Chris Young, Darius Rucker and Dave Matthews Band, plus performed on national television shows such as TODAY, Conan, Late Show with David Letterman, The Tonight Show with Jay Leno, Late Night with Jimmy Fallon, Jimmy Kimmel Live! and FOX & Friends.

"We've passed the 20-year mark as a band. And there's something about that which makes you reflect on everything that we've already done. And now, it feels like we are entering a new chapter. This new music feels full of energy and full of life," Eli recently shared with People.com.

“We still look at each other as college buddies – not business partners,” says Young. “We get to share our lives with each other and we’ve done some really cool stuff, and our music has been the greatest byproduct of that.”