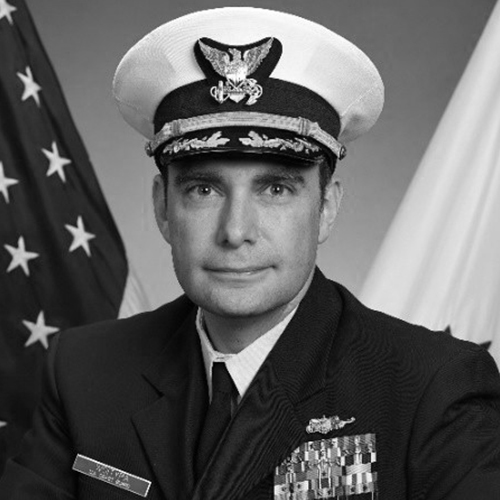 Hailing from Rochester, New York, Captain William Woityra completed a 2018 Fulbright Scholarship studying icebreakers in Finland. He is a U.S. Coast Guard Academy graduate, with a Bachelor of Science degree in Electrical Engineering. His advanced degrees include a Master of Science in Oceanography from the University of Rhode Island, an MBA from Chancellor University and an Advanced Diploma in Maritime Law from the IMO International Maritime Law Institute. He is a graduate of the Joint Military Attaché School and holds his Joint Professional Military Education certificate from Air University. He was an MIT Seminar XXI National Security Fellow in 2018-2019.

A career icebreaker sailor, Woityra is the commanding officer of the Polar Star. He has spent more than a decade breaking ice at sea. Prior to assuming command of Polar Star in 2020, he served as Executive Officer on board. He led CGC Healy on five Arctic research missions, including her historic 2015 expedition to the North Pole, the first time an unaccompanied U.S. surface vessel had reached the top of the world. He served for three years as Commanding Officer of CGC Neah Bay in Cleveland, Ohio. While commanding Neah Bay, he established a cooperative program with Bowling Green State University that led to his crew earning more than 60 college credits for participating in a lake sampling partnership. He served as Executive Officer on CGC Thunder Bay out of Rockland, Maine and previously on Polar Star as Marine Science Officer, where he made one Antarctic and two Arctic deployments. He also served as a research fellow on the Arctic 100 Northwest Passage expedition aboard the Finnish icebreaker NORDICA.

Captain Woityra’s shore assignments include Program Manager for Coast Guard icebreaking, where he set priorities establishing where, when, and why the Coast Guard breaks ice. He also served at the International Ice Patrol, tracking North Atlantic icebergs over the Grand Banks of Newfoundland and two years as Coast Guard Attaché to Malta, where he advised the U.S. Ambassador and Armed Forces of Malta on maritime concerns and taught Search and Rescue Coordinator classes at the Maritime Safety and Security Training Centre.

Captain Woityra’s personal awards include the Defense and Coast Guard Meritorious Service Medals, Department of State Meritorious Honor Award, and various other decorations. In 2018, he was honored as Distinguished Alumnus of the Year by his high school, and received the Alumni Achievement Award from the Coast Guard Academy. He is a permanent Cutterman and has earned the Aviation Mission Specialist and Navy Craftmaster designations. He is a Project Management Professional, LEED Accredited Professional, and American Society for Quality Certified Manager of Quality and Organizational Excellence. He holds his USCG Merchant Mariner Master’s license and is certified as a Level II Ice Navigator. He is admitted as a National Fellow of The Explorers Club and an Associate Fellow of The Nautical Institute.